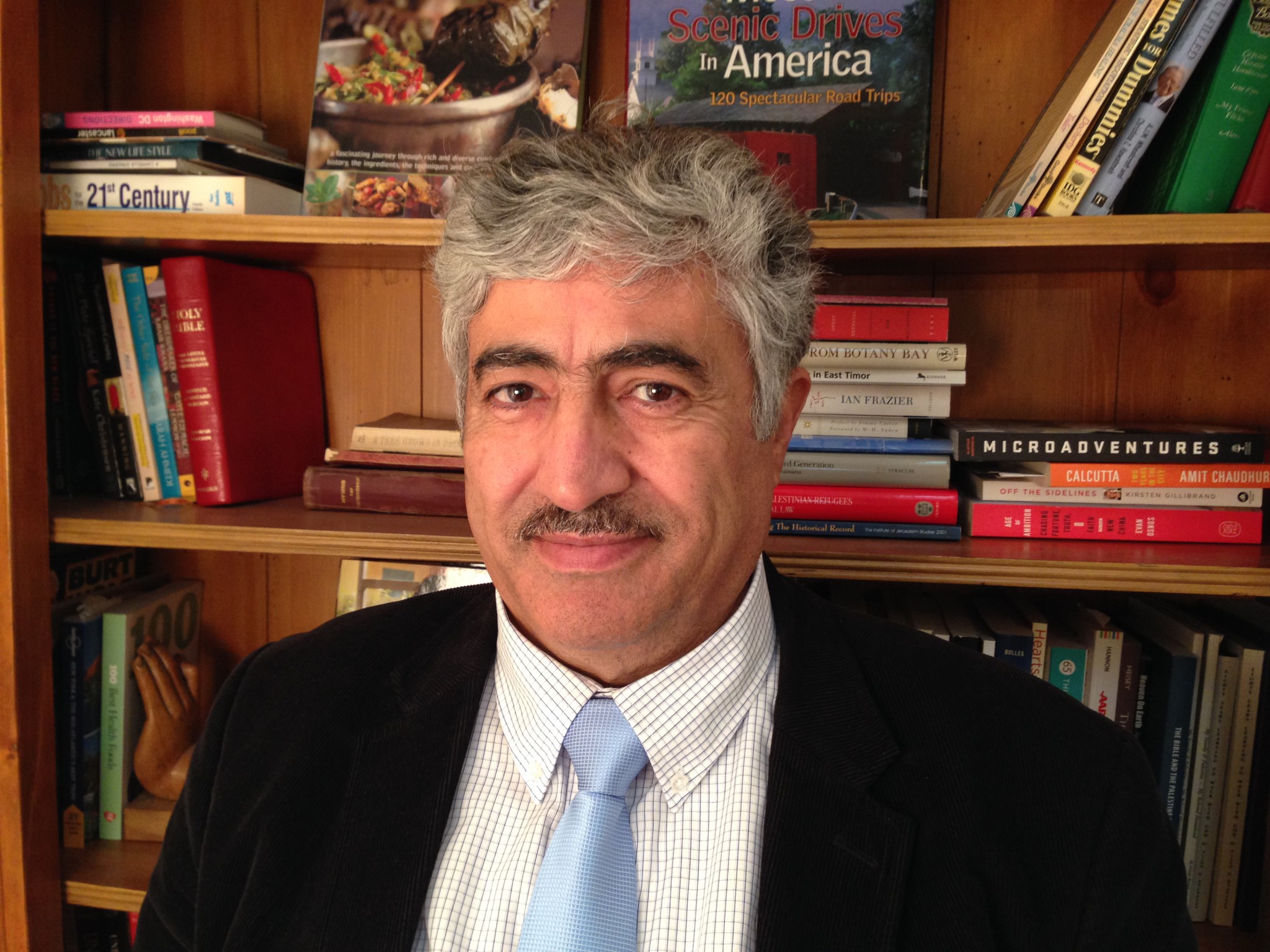 Jonathan, you’ve established yourself as a leading human rights lawyer in Palestine and Israel, what is your background?

My earliest years were in Bethlehem but then I went to Jerusalem for much of my schooling. At the time, the place was small and movement between them was easy.  I went to the US shortly after the June War of 1967, to attend college and law school because I felt that it offered better education. After my studies, I worked at a Wall Street firm in New York to pay off my student debt and then two years later, I returned to Jerusalem which had always been my intention.

What led to you becoming a human rights lawyer?

I thought that law and human rights are perfect tools to fight for justice as well as peace and reconciliation. You see, I’m a pacifist, who has a bias for peace, and conflict resolution, I realized early on the futility of war and violence, and the need for radical compromises. My father was a Church of God minister, so I grew up in a family that was not involved in politics, but which had a great ethic of service to the community and self-sacrifice. Under the British Mandate several small Protestant denominations were established and local people were drawn to them because the major Greek Orthodox denomination was led by Greek priests who didn’t care for “their flock” in ways local people wanted.  It is interesting, though, to note that all Christian denominations in Palestine tend to be pacifist.  Both they, and their Moslem neighbours understood Christ to be a great believer in peace and one who rejected violence and war. I’m staggered that even within evangelical Christian churches in the United States, young people join the military and have been sent to war. I have never deviated from my pacifist beliefs.

So, once you returned to Jerusalem, where did you work?

I was a volunteer with the Mennonite Central Committee, and I also got my legal apprenticeship to practice law in the office of Aziz Shehadeh, Raja Shehadeh’s father.  Later, I started my own office, but in truth, I spent 2/3 of my time working as a lawyer, taking cases, and going to court. But then for the other 1/3 of my time, I worked as a volunteer along with Raja, as we set up Al-Haq, the first international human rights legal organization in Palestine, where we focussed on research and human rights documentation. An early example of our work was the book we authored in 1980, The West Bank and the Rule of Law. It analysed the legal situation in the Israeli-occupied West Bank. It included a detailed study of the military orders issued by Israel affecting the legislation and administration of land rights, water rights, trading and commerce, town planning, trade unions, education, literature, and information. The book showed how Israel  altered the existing laws and administration in such a way as to make the economy of the West Bank subordinate to the interests of Israel, and to facilitate the encroachment on the territory by establishing  Jewish settlements, which are universally condemned as a violation of international law.

But your vision didn’t stop there, did it. Your influence has spread much wider.

Much has unfolded over the years. I was a co-founder of the Palestinian Center for the Study of Non-Violence (now Violence International) and I founded the Mandela Institute for Prisoners. I’m on the board of Sabeel, The Palestinian Liberation Theology Center, and past Chair of Bethlehem Bible College and a few other initiatives. During all that, I set up my own law practice which became the Kuttab, Khoury and Hanna Law Firm in East Jerusalem.

So, is that how you came to represent the Nasser family from Tent of Nations? Because of ICAHD’s focus on demolitions and displacement, over the years several study tours have visited it. Will the family ever win their case?

Yes, early in my years of practice I was approached to help save this 100-acre farm from being confiscated for growth of more Israeli settlements in the Gush Etzion bloc located between Bethlehem and Hebron. The Nasser family has been incredible in their struggle and I believe that the reason why they have so far been able to remain on their land is not only because of legal representation but because they have been great at publicizing their story far and wide. They have demonstrated non-violent resistance by continuing to do things like re-plant trees after being destroyed by Israeli settlers, hold summer camps for local youth, and host internationals for short and long term visits. Ultimately, justice in the end must prevail.  It is not whether their family will win, or the settlers will win.  It is whether brute force and oppression will win, or whether justice and reconciliation will win.

You’ve been quoted as saying that peacekeeping is a way of life. How have you outworked this in your life?

For me, the question is not only political.  It is also spiritual.  It is a question of whether we will live by the rule of the jungle, with the strong swallowing up the weak, or whether law (including international law, human rights law, and the natural laws of justice and fairness) will have the last word.  To do that we must believe that these principles are universal and applicable in all spheres of life.  A person cannot maintain that he or she  believes in peace and in nonviolence, while being a racist, or sexist, or oppresses women and minorities, or exploits others, or denies them their basic rights which is why Israel’s claim to be a democracy sounds so hollow to Palestinians.

Tell us more about your vision for the future.

I was attracted to the idea of a two-state solution as a pragmatic choice soon after 1967.  However, I then watched with dismay as every additional land expropriation and settlement confirmed that Israel was not interested in peace but in dominating the entire area and pre-empting any possible compromise. That meant that the idea of a two state solution, which appeared to be a moderate compromise could not be achieved, and that we needed to address the issue at a more radical level, even though that appeared to be the harder choice.

In November 2016, I was invited to speak at a New York City synagogue where I shared my developing vision for a one-state solution, having been reluctantly persuaded that a genuine two-state solution was no longer possible. I said that the Zionist movement had created a minor superpower out of practically nothing in one century, and with every possible advantage in its favour, not to mention the support of the world’s only super power however, it still failed to eliminate the Palestinian people or their national aspirations, any more than the Palestinians, with or without the support of the Arab world have been able to eliminate or defeat the Zionist movement.  Therefore, without in any way implying that the two are symmetrical in any way, I felt that each movement needed to rethink its ideology and find a way to alter its views to take in the other.

New thinking, beyond the two-state solution, would require  for each group to sufficiently empathize with and understand the hopes, fears, interests, and aspirations of the other group and to sufficiently moderate/alter, and otherwise change its own ideology to accommodate the other group rather than seek to vanquish and dominate it and deny it any legitimacy.

We must find a formula that accommodates both the Zionist desire for a Jewish state, and the Palestinian Arab nationalism.  Such a formula must contain sufficient iron-clad legal and institutional guarantees that protects each group, particularly the minority and the individual, against the caprice of the majority.  This is especially true where historic differences and recent enmities control present realities.

New structures must be created and iron clad  guarantees must be firmly established in constitutions and laws that cannot be altered or overturned by numerical majorities, or that require a supermajority of more than one house of representatives, so as to prevent them from being derailed by the group which has a numerical majority . Only in this fashion can we put away the fear of demographic catastrophe where each group either rejects democracy or is constantly watching the birth rate and numbers of the other group.

This is all the more necessary because of the centrality of  the land and of Jerusalem to all three monotheistic religions, giving  the international community as a whole  a significant stake in the governance of the whole country and ensuring open access to it, and non-exclusive control over its destiny. Jewish, or Moslem claims of exclusivity (thank God, Christians have ceased, since the times of the Crusaders to make such exclusive religious claims) cannot be tolerated.

For a solution to commend itself to people of goodwill on both sides, and significant third parties as well, it must address the major needs of each community.  These needs should be identified by each side as bottom line irreducible requirements, as opposed to desired or demanded outcomes. These needs must be met and addressed by the new order regardless of whether the group is in the numeric majority or minority now or in the future.  This would be a hard pill to swallow for Palestinians who feel they have been deliberately oppressed, and ethnically cleansed and occupied for many years, to be willing to share equally their land with their oppressors; but it is an even harder pill to swallow for Zionists who are still buoyed by their success into an arrogant racism that totally dismisses the Palestinians as almost non-human obstacles to their superior power and “manifest destiny”.  The battle is therefore not simple or easy, but it is in my view inevitable.

This sounds wonderful but right now we await Israel’s announcement to formally annex great swathes of the West Bank, thus we are far from moving on towards one democratic state.

Yes, there are major obstacles to overcome. Israel is in a position of tremendous power and no one volunteers to give up power so internal and external pressure must be exerted on it. In addition, the Holocaust syndrome still exists. Because of Jewish history and their reality of genocide, this people group still feels that it cannot trust the “other”. They feel they cannot let their guard down; they need absolute security and a place of refuge. This is a huge psychological task and healing is needed before they can trust any new formula that is not based on their absolute power.

The overall situation is rapidly changing, and the killing of George Floyd in Minneapolis is proving that history can’t be hidden forever. Israel has created a form of apartheid where all power is wielded by one ethnic/religious group at the expense of the other while claiming to be a democracy. More people have come to realize this, including Jews in America who are pulling back from supporting Israel. For me, working for one democratic state over all historic Palestine is the right way ahead. It must be a win/win solution for both people groups.