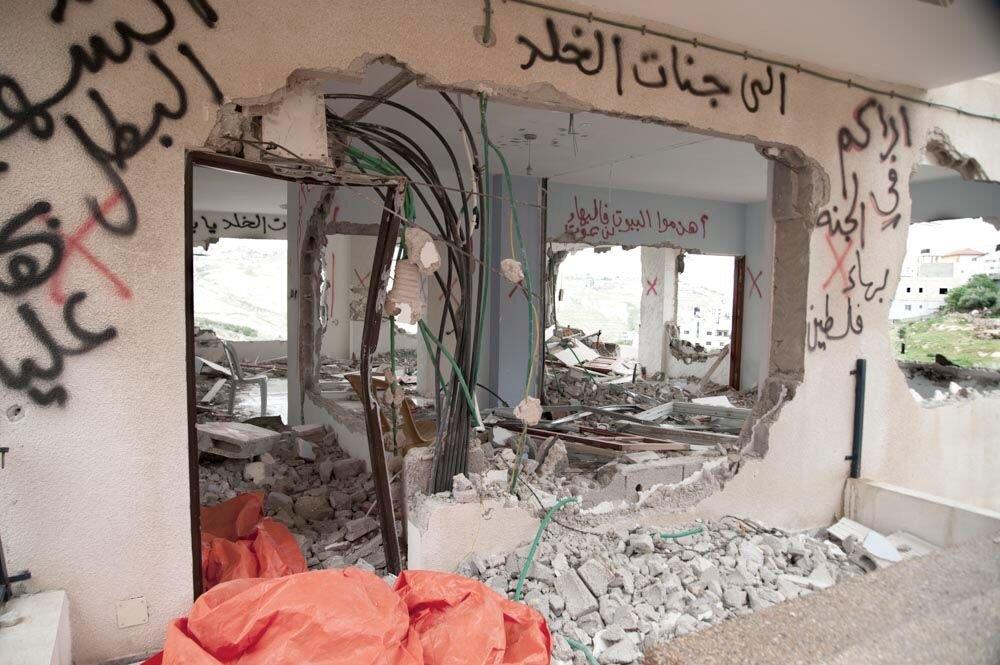 September saw a slight decrease in Palestinian home demolitions as a result of the Jewish holiday season. However, the month of October brought renewed misery to Palestinians across Israel and the Occupied Palestinian Territory, with demolitions taking place almost daily.

On October 16th  demolitions were conducted by Israeli forces in occupied East Jerusalem and the general Jerusalem municipality, in operations conducted in order to remove all Palestinians from the historically and religiously significant region. The first of which was in the neighbourhood of Jabal al Baba, which has faced constant oppression and demolitions by Israeli forces over recent years. The second demolition that day was in Badu al-Baba, northeast of Jerusalem, where an Israeli house demolition displaced 27 Palestinian residents, including 18 children and teenagers. In another cruel display of force, Israeli forces also demolished two communal bathroom stalls in the village which were donated by international aid agencies.

Demolitions in Jerusalem continued over the following days, with Israeli troops demolishing two houses in the east Jerusalem neighbourhood of Silwan on October 17th, displacing its 9 residents. Only the next day on October 18th, the Israeli state demolished a residential building in Beit Hanina, occupied East Jerusalem, leaving many homeless.

October 19th brought particular misery to the Palestinian people, with 8 separate demolitions conducted by the Israeli state across the OPT and Israel. In Tublas, in Jerusalem, a home belonging to a family of five was demolished.  In Halaweh village in the Hebron district, two houses were demolished, one was home to a family of 15 including 7 children, and the other was home to a family of three with one child.  Another village in the district of Hebron, al-Tuwani, suffered the demolition of an agricultural structure. Attacks of farmers by Israeli forces have been increasing in recent years, forcing many families to lose their only source of income. In the nearby village of Beit Ummar, steel structures were demolished and their contents confiscated. Further demolitions on October 19th took place in Bir Hadaj near Kibbutz Revivim, where a residential trailer was confiscated and a shack was demolished. In Sawawin, near Abu Talul, one home was demolished. In Kuhla, north of road 31, three homes were demolished, and in Tel Al Malah, west of Kseife, one home was demolished.

A few days later, on October 24th, Israeli troops demolished a Palestinian home in the Israeli city of Lod, citing a lack of difficult to obtain building permits, which are rarely granted for Palestinians. The same day, in al-Walaja, northeast of Bethlehem, a two-storey home was demolished, leaving many homeless and displaced. A couple of days later, on October 26th, one home was demolished in Khirbit Yanoun, northeast of Nablus.

The final demolition of October 2017 took place on the 30th of the month, with the demolition of a community tent in the village of Al-Bustan in Jerusalem. The tent was first erected in 2005 after the 88 Palestinian residents of Al-Bustan village received immediate eviction and demolition orders. In the 13 years since its erection, the tent was the only safe space in the entire village for the community to gather and hold all important events including celebrations and funerals. Lawyers for the village managed to obtain a court order to prevent the demolition of the tent, but by the time they had returned, Israeli troops had already demolished the tent, ignoring the legal right to due legal process. Israeli troops then proceeded to attack the Al-Bustan residents who gathered, firing rubber bullets and tear gas canisters on the group of predominantly women, children and elderly residents.