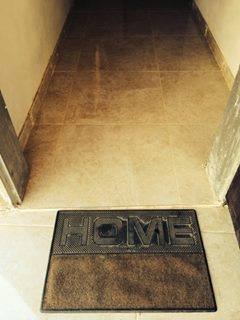 Jean Riesman, an American ICAHD rebuilding camp participant, provides more insight into the demolitions in Dahmash, a ‘unrecognized’ community within the state of Israel where every home is slated for demolition.

DAHMASH: NO PLACE LIKE HOME
Debris from the houses demolished in April in the Palestinian-Israeli community of Dahmash still sat next to the newly, defiantly rebuilt dwellings. At one threshold, a welcome mat testified: “Home.”
The welcome for that house and its neighbors did not last long. All were re-demolished on August 4, a few days after we came to witness – as members of a delegation of the Israeli Committee Against House Demolitions (ICAHD) – the daily battle for urban survival in Dahmash. On the outskirts of Tel Aviv, adjacent to Ben Gurion International Airport, the village is sandwiched between two hostile Israeli municipalities, on the discarded side of railroad tracks with no signal at the crossing. And every building in Dahmash is slated for demolition – a clear Israeli message to the residents that there is no place like home for them here.

Over 46,000 Palestinian homes have been destroyed since 1967 by Israeli authorities on both sides of the increasingly insubstantial Green Line. And looking further back, there have been more than 120,000 home demolitions on both sides of the Green Line since the founding of the state of Israel. The rubble is scattered across the occupied territories, in West Bank, East Jerusalem, and Gaza. In both urban and rural Palestinian precincts within present-day Israel, the “bulldozerim” (the Hebrew plural of an English word that needs no further translation) have knocked out the cement-and-rebar columns of concrete-block construction and the flimsier supports of more improvised shelters for people and animals. Israel presents the relentless destruction as routine enforcement of ordinary land-use codes in an orderly regime of building permits and master plans. But Dahmash is under the regulatory siege meant to erode all Israeli-Palestinian communities, a strategy carefully crafted to squeeze, disrupt, and disperse 20 percent of the country’s citizens on a permanent basis. Arafat Ismail, a longtime leader of local resistance, told us (speaking through a translator), “We are living like ghosts here.”

Although displaced Palestinians were moved here after the 1948 war (including Ismail’s father, who arrived in 1951 after accepting an Israeli take-it-or-leave-it land deal) and its 700 residents are Israeli citizens, Dahmash is “unrecognized” – in the array of legal constraints on Palestinian districts, a near-fatal category. Thus residents get no services from either of the local governments that turn their backs on the village: no garbage collection, no electricity, no street addresses, no sanitation, no parks, no schools. Ismail has two children with developmental disabilities, and went to court to fight for them to attend a nearby special-needs school. The court ordered the regional council to enrol them and provide transportation, but the council has not complied. A former regional council head denied that Dahmash ever existed, and indeed the village is not listed in official Israeli records. In fact, all current families have been assigned a single address – a building that was torn down years ago for a transportation project, in another town.

Dahmash’s real estate is caught in a set of bureaucratic cycles that seem designed to be irresolvable – urban planning by Moebius strip, in which the quest for land tenure, residential zoning, and a building permit is frustrated at every turn. According to Ismail, “Every single effort to legalize has been rejected and sometimes met with force.” Technically, under rules dating back to the British Mandate before Israeli statehood, all of Dahmesh is zoned agricultural; as Ismail noted, relocated Palestinians such as his father were given “land without houses, and were forbidden from building.” Moreover, even when ownership is firmly documented in the Israeli Land Registry, the state will not recognize their legal tenure.

Detailed applications for building permits and zoning variances are denied, and subsequent appeals and court action drain residents of time and resources. Some build anyway, without permission, and demolition orders follow. Fighting demolition orders means more lawyers and court hearings. Meanwhile, Jewish-only housing and industrial parks routinely get variances, sometimes retroactively, and spiral in around the community. In an effort to overcome its “unrecognized” status, stake its documented legal claims to the land, and open up the suffocating zoning process, Dahmash developed a master plan in 2007, as required under Israeli land-use law, but it was turned down in 2010. Local elected officials, Ismail said, have told him to “just continue farming your tomatoes” and to “hire yourselves a bulldozer and flatten out the houses you are living in.”

The round of house demolitions on April 15 proceeded at 4 a.m. despite a standing Israeli High Court decision that called for an agreement between the residents and public officials on the land disputes as well as a demand by the local district court that the state delay its demolition plans. A military helicopter hovered over the village from midnight on. Armed and camouflaged soldiers surrounded each house, and residents were forbidden to go outside. Ismail’s cousin looked out the window and was pepper-sprayed. He said that “a kid had opened his back door and been pistol-whipped and held at gunpoint,” while another teenager was traumatized when a soldier told him, “‘See this house? We’re going to break down this house, this house, and this house.’ So now he sleeps with his parents every night.”

These raids are common in the occupied Palestinian territories, where home demolitions also are masked as administrative responses to missing building permits. In addition, they are rationalized within Israel’s security framework: the collective punishment of families whose members have been labeled as terrorists; the clearing of declared military live-fire zones and nature reserves; the attempts (as within Israel) to erase the nomadic Bedouin population; and the protective buffers for the settlements whose vulnerability has been induced by their illegal insertion into the landscape. On either side of the territorial line, the objective is the same: to drive out Palestinians. And the unpredictable, devastating experience is the same.

Ismail reflected, “Inside [Israel], the issue is not different from the West Bank. Maybe inside is more difficult, because [people] don’t know what is happening here.” Here, in the center of Israel, where there is meant to be no place like home for him.