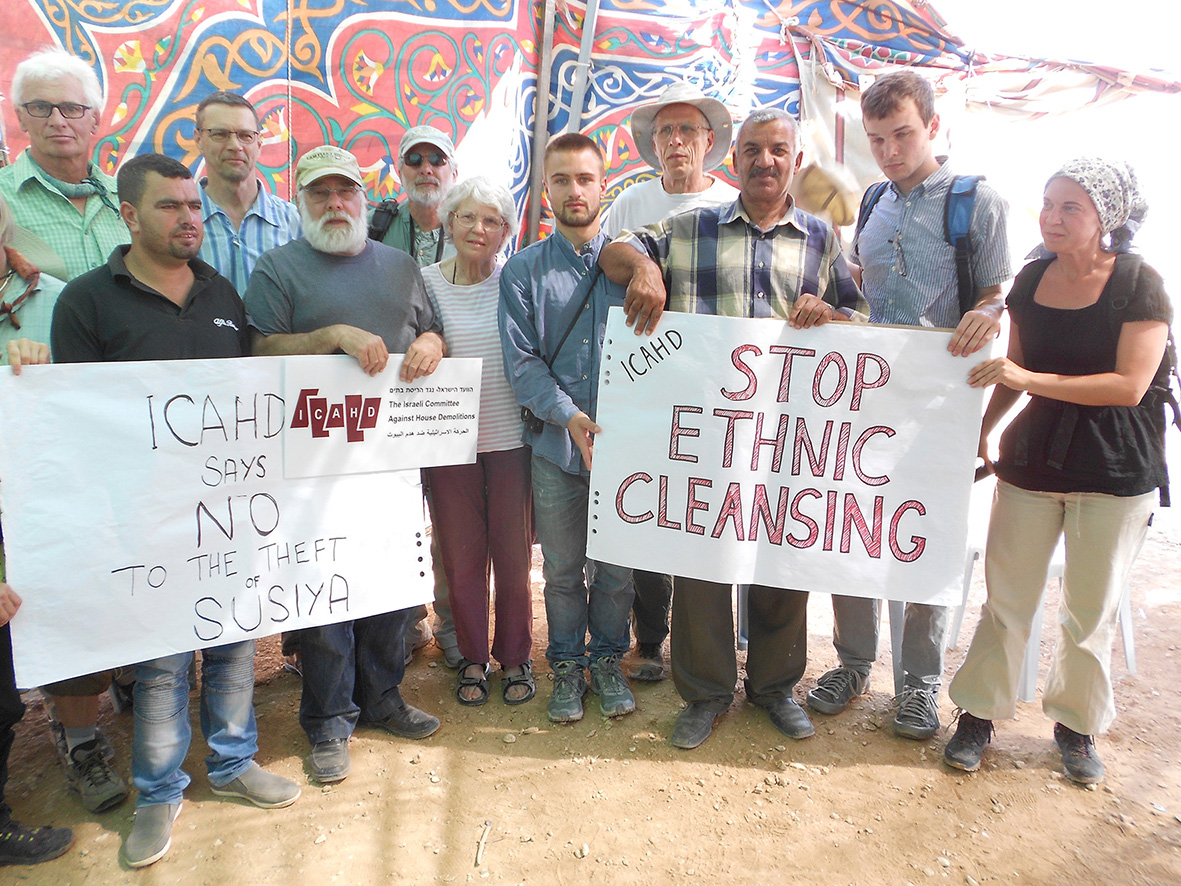 With all the attention about the imminent threat of demolition of the village of Susiya that would result in the displacement of the residents, it was important for the ICAHD camp participants to travel to the South Hebron Hills to demonstrate our solidarity with the village. We arrived early in the morning and were welcomed by representatives of the EAPPI team who are based there to provide protective presence. Village representative Nasser Nawaj’ah provided a briefing of the current situation.

He told us that alongside Susiya, an illegal Israeli settlement of the same name, arrived in 1983, and that it now houses close to 1,000 residents. They are provided with piped water, electricity, waste collection and basic infrastructure while this ancient village of Susiya has never been provided with these services.

This Palestinian village suffered demolitions in 2001 and 2011 due to lack of building permits, and now is under a further demolition order for the majority of their structures in the area, including the schools, and animal shelters, etc. A relocation plan has been drawn up for Susiya, which has been rejected by the villagers who disapprove of the poor quality agricultural potential and the distance from their original land. The Palestinian villagers claim the land they are on is their private property, and that they have lived there for generations. As we stood in the village, ancient roads were pointed out to us that follow from the site leading directly to Egypt.

The Israeli authorities have retorted that the village has been built without permits (which have not been issued retrospectively) and is therefore illegal. They have also designated land adjacent to the site as state archeological land – not for development or residential uses.

Because Israel doesn’t provide even the most basic services for the village, the people are forced to live in dire and dangerous conditions in tents and cave-based structures. Humanitarian donations from internationals and aid agencies have funded other structures in the village. Water has to be purchased at an extortionate rate that is five times higher than the price the nearby settlers pay who can rely on unlimited water through their mains taps.

In general, lack of building permits may seem a legitimate reason to cite for demolition. However, to dig a little deeper, whilst acknowledging that Israel controls who to give these permits to in Area C of the Occupied Palestinian Territory, it has given a permit for roughly only 1% of the Palestinian cases brought before it. Therefore we start to see the superficial and targeted nature of this law.

The reason Israel has not demolished Susiya yet is because of international attention and an international presence in the region. A major demonstration on Friday gathered hundreds of supporters to the site, and ICAHD’s signs were present among the banners. Yet there is still fear that Israeli authorities will wait until attention shifts elsewhere and then they will send in the soldiers and bulldozers to clear the area. We say ‘Remember Susiya!’

Please write to your political representatives to ask them to highlight this issue and protect the residents of Susiya from further demolition.

UNOCHA state clearly that: “International law prohibits the forced transfer or displacement of civilians and the destruction of private property. It also prohibits forcible transfer of the population of the occupying power into the occupied territory, as reflected in the establishment of the settlers.”

– (With thanks to participant Miika from Finland for his analysis).