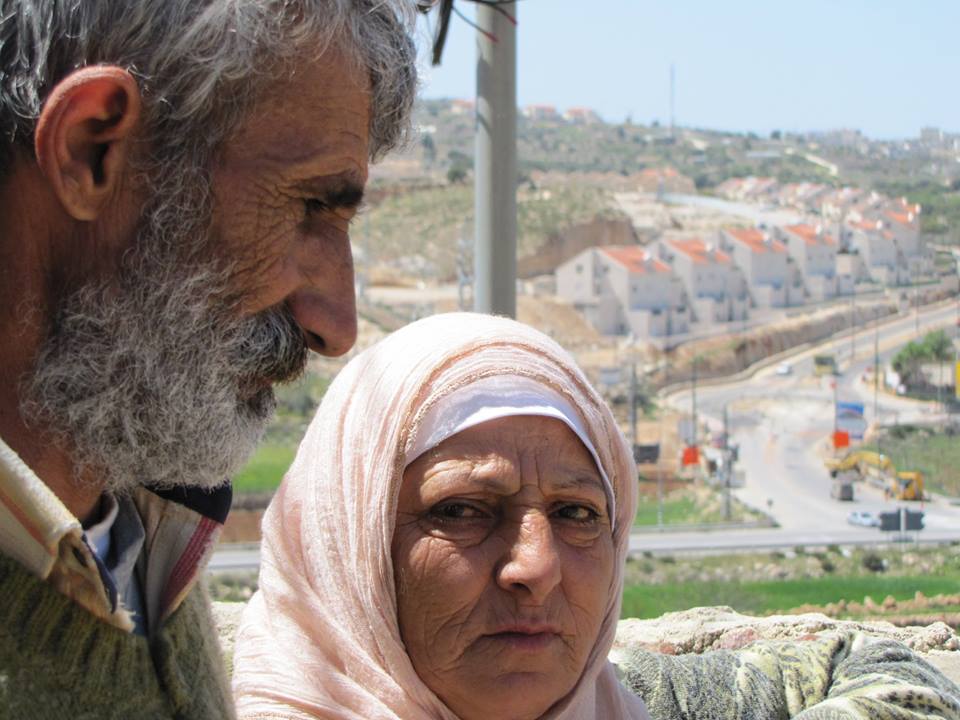 What is genuine non-violent resistance to oppression? Let me show you. Yesterday I visited a Palestinian friend, Atta Jabar, in the West Bank, near the Israeli settlement-city of Kiryat Arba – a farmer, most of whose lands have been confiscated and lie under buried under the Jewish homes. In the first picture you see his meagre farm, with the settlement covering what used to be his almond trees and vineyards; in the second Attah and his wife Rudeina with the settlement in the background; and the third a close-up of the settlement (Givat Harsina, a suburb of Kiryat Arba).

Every moment of his life and that of his wife Rudeina and their four children is resistance. ALL his land, including what you see here, has been declared Israeli “state land,” slated to be taken for the next stage of the settlement. His home, declared “illegal” by the Israeli authorities, has been demolished twice so far. In the last demolition, carried out on a freezing December day, my friend approached the soldiers and, in desperation and despair, tried to hand them his new-born baby. “Here, take him,” he said. “I have no home to raise him in.” In response (I was there), the soldiers beat him severely as his home was being destroyed, and arrested him. The charge (I swear its true): “Attacking the soldiers with a baby.” He received 6 months in prison and a hefty fine, impoverished as he was from the loss of his land and home.

Since then his home has been rebuilt as an act of political resistance by the Israeli Committee Against House Demolitions (ICAHD), but they do not live in it securely. Besides constant threats of demolition by the Israeli authorities, the family is continually harassed and attacked by the fanatical settlers of Givat Harsina, the new neighborhood of Kiryat Arba visible in the picture. Here is a video of those attacks.

For Palestinians like Atta and Rudeina, every minute of life is resistance. “I have never known a day of freedom,” Atta told me, “I have never known a moment of true calm, of peace, of just plain happiness. Not me and not my children.” Every plant he plants is a struggle, since he is planting “illegally” on his own land that has been rezoned as Israeli “state land,” and he is denied water. Look at his dying zucchinis. He cannot even dig a cistern to collect rainwater without Israeli permission. This film shows Palestinians and Israelis (including me) resisting the demolition of cisterns, while Givat Harsina has an Olympic-size swimming pool and lush, green parks.

This is what genuine non-violent resistance looks like. The Jabar family, like the sunflower arising from the soil dried out by the Israelis, refuse to die and leave their land, as Israel wants. They are sumud, Arabic for “steadfast,” and we must stand with them.