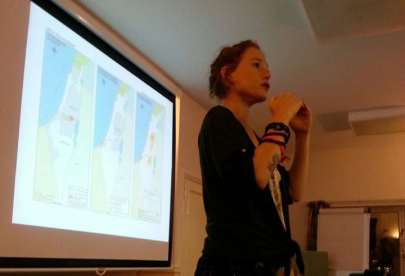 How have you got to the point in life that you’re at now – conducting tours, representing people in Palestine as an advocate?

Ruth Edmonds (RE): Jeff Halper will say that I used to turn up at the office all the time so they gave me something to do! I don’t quite remember it that way! About 4 years ago, I went on an ICAHD tour myself to understand more. Less than a year after moving to Jerusalem and I was working for ICAHD.

I remember my first tour in the UK, being suddenly up there speaking, with people asking difficult questions, and I realised that I do have answers and I do know the analysis behind it. That’s what’s so great about ICAHD – my understanding constantly evolves. I get to work with Jeff Halper, I have this brilliant mind on tap, to sit with and discuss things, even though we don’t always agree.

Why is it so difficult for Israeli’s to talk about what’s happening in their society?

RE: Because it’s an identity crisis. Because Israeli identity is deeply entrenched in the establishment of the State and the displacement of 750,000 Palestinians in 1948.

What we are saying, as Israeli Jewish activists, is that we need to take responsibility for this negative aspect of our history and make reparations. And to understand that what Palestinians do is a reaction to being under oppression.

Look at Israeli analysis when it comes to Gaza, or any attack on the Israeli State generally: there is never any question as to why these people are going out in the first place and killing us, or blowing themselves up. Why are they doing that? It’s the key question we need to be asking, it can’t be looked at in isolation.

RE: It makes me think of a corny sentence: ‘Bad things happen because good people do nothing’. It’s that.

Ruth, you had open-minded, activist parents growing up – how different would you be without that?

You must get frustrated with fellow Israelis who aren’t engaging with the issues. Do you ever feel sympathy for them in some ways?

RE: Sympathy definitely not! [laughs] The last thing I feel for them is sympathy. My frustrations are more with myself than them. Every time they react to me I’m thinking ‘how is it that I’m not getting through?’ I’m explaining so clearly what the situation is, but there’s this defence mechanism they have which is so difficult to break through because it’s so emotional, it’s not logical. So it doesn’t matter that I have lots of facts and statistics.

Do you think Israelis can empathise with the other side?

RE: Barak [former Prime Minister] said ‘if I was born a Palestinian at a particular age and time I would’ve ended up being a freedom fighter’. The thing is it’s a cold empathy which says ‘I’d probably react the same way if I was in the same situation as you…’

It’s also this massive fear that politicians have of making a step towards peace because the loud voice from mainstream Israeli society is: ‘No! We’ve got to keep a good security system in place because that keeps us safe’. What they don’t realise is that security structure is oppressive. They only know the Occupation in terms of security so when I talk to them about taking away that security they freak out, they say: ‘What do you mean, the only reason I’m alive is because of the Occupation!’

This place is a fear factory.

But then my friends sometimes surprise me. They do react when they hear fellow Israelis being racist. They will say this is horrible, no one should be speaking this way about anyone. Incidents happen and some friends are totally sickened and shocked by it. And I’m like, ‘This is our society’. They are very violent, very racist and they are not aware of it. Which is why I always say on tours, ‘We don’t need the UN, we need an army of psychiatrists!’

What would you say to someone back in the UK who thinks Palestinians must all be terrorists?

RE: I would have to take them back to the beginning, back to 1948. I would do what I do on my tours, show them the process, how it’s developed, literally hold their hand and walk them through it!

What’s the most powerful story that stays with you from your work with ICAHD?

RE: Jan 2014, I was with a group next to the Separation Wall at the end of Jericho Road doing a briefing. I saw a man feeding documents through this tiny gap in the wall. It just so happened that there wasn’t anything blocking that gap on the other side – because usually there would be.

I stopped the van and asked the man to explain what he was doing. He said, ‘Well, my business partner lives on the other side of the wall. Instead of me driving 25 minutes to get round to him, we just meet on opposite sides of the wall and he feeds documents through to me and me to him’.

To me it is the perfect metaphor of what’s happening here.”
Ruth Edmonds’ awareness-raising tour of the UK: ‘Palestine & Israel: Where Are We and Where Are We Headed?’ runs from 23rd February – 4th March, and is a fundraiser for ICAHD.

Ruth was interviewed by ICAHD volunteer, Chris, in February 2015.