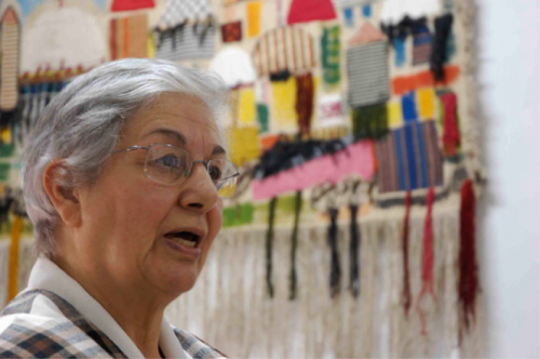 As International Women’s day approaches, I reflect on a conversation I had with a striking woman of 80 years old. She is a Palestinian woman who has lived through the Nakba (‘catastrophe’) in 1948, losing her home, her history and heritage virtually overnight. Her vision now is to create a ‘Grandmothers Solidarity Group’ to challenge the Occupation.

‘I can see us all, elderly grandmothers, linking arms and marching in the first line of the demonstrations so that when the soldiers teargas everyone, they will have to hit us first.’

In the face of such courage, I ask this fiery yet kindly woman how she has managed to overcome so much fear throughout her life.

‘We don’t stop feeling it, we learn to live with it,’ she tells me. ‘When I had children it was much more frightening and I didn’t do what I should’ve done. I was worried they would punish my children if tried to resist what was happening.’

‘I remember being in Nablus with my two little boys and gunshots flying through the air around us. The army decided to make our house a lookout spot so every day Israeli soldiers would storm in and out of our house up onto the roof. We were never allowed to lock the doors.’

This woman goes on to explain her discovery of non-violence as a powerful means of resisting injustice whilst recognising the humanity of one’s oppressors.

‘I wanted to reach the soldiers’ humanity. To let them see that we are both human beings.’

‘I could see that one of the young soldiers was starting to warm to me, he would leave his gun outside to use our toilet because he said he trusted me ’.

At the time, there was a ‘shoot on sight’ curfew where anyone seen on the streets after hours would be instantly shot, the soldier said to her, ‘how will you feed your family, your food has all gone?’

He left her a loaf of bread on the table. ‘But I could not accept it, I could not take anything from him. I said, ‘if you take off your uniform and give me it I would accept, I would welcome you into all parts of the house and you would be my guest’. Instead, the soldier turned a blind eye after curfew and allowed her to get bread from a neighbour.

As I think of this bold woman’s vision to create a grandmother’s group to resist the devastating impact that Israel’s Occupation continues to have on peoples’ lives, I am reminded of Alexander Solzhenitsyn’s account of the elderly women in Stalin’s Russia who would defiantly go into the cathedral each week to light a candle, knowing they could be informed on, arrested and sent to the Gulag for doing so.

It seems that despite the centrality of men in perpetrating situations of war and widespread violence, the collective action of women can be pivotal in catalysing change and resolution of these abuses.

Yet, having recently been on the receiving end of some intense questioning and intimidation tactics by security officials at border control, I am aware that women can often be the most ruthless when in positions of power. Perhaps even more so than men. Whether this is a form of over-compensation in response to living in a highly militarised and male-dominated society, is not for me to say. But what does seem clear is that the power of women is decisive; it is the ends to which this power is invested that matters.

As women around the world gather in solidarity on International Women’s Day, my hope is that Palestinian and Israeli women will choose the path of courage over fear, and embrace the immensely difficult task of seeking out their shared humanity as they struggle to end oppression and injustice in all its guises.