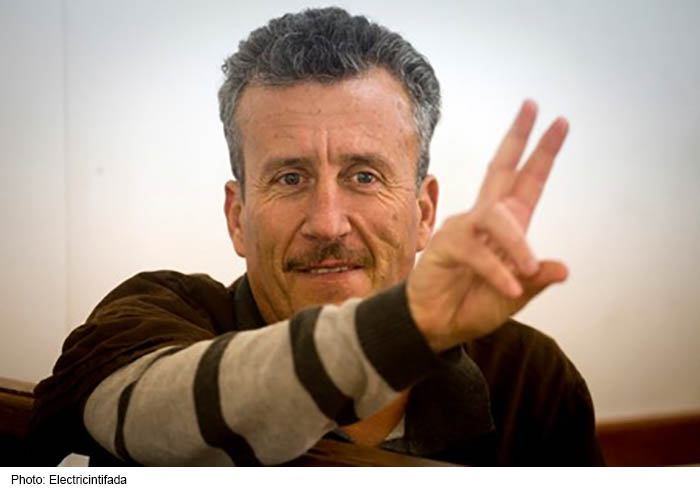 Palestinian grassroots activist, described by the European Union as a human rights defender,
and designated by Amnesty International as a prisoner of conscience

Bassem, I know that you are from Nabi Saleh, a Palestinian village that has become known for its weekly demonstrations against confiscation of your land for settlement construction. Please tell us a little about your background.

Yes, my name is Bassem Tamimi, and I am from Nabi Saleh, 20 kilometres northwest of Ramallah, a small village with around 530 people. I grew up in a small family with one older sister, but we are part of the Tamimi family, which is a big family in the West Bank. Four hundred years ago, the Tamimis came to Nabi Saleh from Hebron and another part of the family is in a different village. My parents and grandparents were born in Nabi Saleh. I attended school in Nabi Saleh until the fourth grade and then I went to a neighbouring village for more schooling. We walked five kilometres in the morning and evening to get to it. After the tenth grade, I enrolled at Birzeit University because I wanted to attend science classes. I then went to the Beirut Arab University for one year but after that the Israeli authorities didn’t allow me to leave Palestine to study.

When the First Intifada started, I was involved in protesting and so the Israeli authorities started arresting me. I couldn’t continue my education in the West Bank because schools and universities were closed. When they opened again, I returned in 1995 and 1996 to finish my first degree in economics. After that, I did my Masters’ degree in international law.

I want to say more about my village of Nabi Saleh because this village is part of the history of Palestine, so it experienced the Ottoman period under Turkish rule and then it was under the British Mandate. The people of Nabi Shalen have always resisted outside control. Now we also have the settlement of Halamish which controls more than 80% of our land. The settlement was started in 1976 and when that happened, we began our struggle to stop the construction of the settlement. The Israeli High Court issued an order to halt the construction for a year, but it resumed after people from the Likud party went to the authorities who decided that the settlers could return to building in the West Bank. When the settlers came back, they put up a fence around the land they wanted but each day they would move the fence a little bit more so that they could annex additional land to expand their settlement. We now live under the shadow of that settlement.

As you have lived under a brutal military occupation your entire life, can you describe in more detail the atmosphere in the village as you grew up and how this influenced how you raised your children?

Life under occupation is hard; everything is difficult for us. It is not normal to have to live this way. Here in Nabi Saleh, we want to retain our human dignity, so we feel that we have a duty to resist the occupier and not to accommodate it. We believe that nobody can respect you if you accept the occupier.

When I was young and in school, we celebrated special days such as Land Day and the International Peace Day. We always made special preparations to remember the National Day of Palestine in our history. I was nine years old when our parents and grandparents started demonstrating against the settlement construction of Halamish on our land. I saw the tear gas. I heard rubber bullets being shot. I saw a lot of soldiers in my village.

When I did my science studies at Bir Zeit University, I participated in the youth movement there and then during the First Intifada Israeli authorities arrested me and over the years, that has happened many times. The last time was in 2013. While I was in prison I was tortured, and it left me paralyzed for a while.

I married in 1994 and in 1996 our first child was born. When the Second Intifada started, there was much activity. There were a lot of Paletinian political prisoners and as a family we participated in demonstrations to remember them, and we also joined the Nakba demonstrations.  The Israeli army arrested me during the Second Intifada in 2003/2004, they also raided my home many times. We knew we needed to protect our homes from the settlers and by 2009 we felt we couldn’t keep silent so to protect the colonization of our land, we had to take responsibility through action.

We are involved in resistance because we want our freedom and everything we value and believe in. I have lost a lot of people from my family. My uncle, my sister, my brother-in-law, and two of my nephews were killed by the occupier and so were some of my friends - a lot of people. Actually, my sister died when she went to see her twelve-year old son who was being held in an Israeli military court. She was pushed by the soldiers and fell down the stairs and broke her neck. At the time, I was in jail myself.

Because Nabi Saleh is an active village in resistance, we have high percentage of detainees. Most of our relatives have been in jail. Many youths have been in jail. Even the first woman who was arrested was from Nabi Saleh – she is my cousin. It means that this culture resistance is part of our daily life. As a family, we participated together in demonstrations to show that other Palestinian families can follow our example. And I think that we succeeded and that we have been a model to others.

Once when talking to my daughter about the Occupation, she asked me about being fearful. I told her she should not be led by fear but to focus on bringing change and for that she must be strong and brave. I believe that in this struggle we must go beyond fear to win our humanity.

Can you say something about violent versus non-violent resistance?

We started talking to people to convince them to only use non-violent resistance. Then Israel started building the Wall and it caused villagers, the owners of the land, and farmers to start protest activities to protect their land. We used the power of the people in front of the armed enemy who used violence. We came with our moral power in front of military forces. I believe that non-violent resistance is better and a more moral way to identify ourselves to get back our land from the colonizer.

When we started our demonstrations in Nabi Saleh in 2009, we were the model of non-violent resistance to convince our people that this is the model that should be used because we can’t just talk.

What has it meant to you and the people of Nabi Saleh to have Israeli activists join you during demonstrations in your village when you stand up to the Israeli army?

In my life, I have suffered a lot. I’ve been jailed nine times. Twenty-one people from my family have been killed. It’s the actions of the occupier that causes us so much suffering, but we don’t have hatred in our hearts. We don’t have any problem with people because of religion or personal beliefs. We are against colonization, capitalism, and imperialism. All of these are our enemy and the people who believe in those things.

It was strange when Israelis came to act with us because before that happened, I didn’t have any relationship with them. The image that I had of Israelis were the soldiers doing the shooting, the mad woman who pushed my sister in the courthouse, the officer who tortured me and made me paralyzed, and the settlers who stole my land.

It was strange for me to see Israelis come to our village, more than a few – a lot – who had changed their beliefs and become more human. I think that when I saw them and learned about what they believe in, it allowed us to come together to resist together. They have become part of our struggle. We hope that the Israeli peace activists will increase in number to help change what most other Israelis believe. I think that Israelis are the victim because they accept to be the occupier.

You have said that the Oslo Accords were a mistake and that you now speak of one state.

I believe that the Oslo Accords have resulted in the second Nakba of the Palestinian people. Agreeing to them made the Palestinians accept the Occupation, living with the occupier and acknowledging Israel on 78% of Palestine. Accepting the designation of Areas A, B and C has allowed the Israelis to take more of our land from the river to the sea. The Israelis do not want to give is anything because they don’t believe in peace and justice. The two-state solution is no longer an option. I think that we must unite our struggle to build one state over all historic Palestine where we can live together because we do not hate anyone because of their religion. We must build one state without colonization, and this will be a long struggle. We ask for civil rights for each one.

Can you give us an update on what is happening with the Popular Struggle Committees in the towns and villages?

Our committee participates in every place possible with non-violent resistance. But I think that the Popular Struggle is in a weak period because there is division between the Palestine Authority and the Palestinian people. We need a unified leadership, and a strategy needs to be identified that we can get internationals to support. All the Palestinians need to be part of our struggle – every day - to bring the change we want.

In your opinion, what are the best ways for internationals to demonstrate their solidarity with Palestinians?

Internationals can’t come here just for tourism. If people come to do Palestinian cooking or dabka dancing, it’s part of learning about our culture and identity but I think that much more support and solidarity is needed. We don’t need your tears because we have a lot of tears from tear gas. And we don’t want the people to see us victims because we are freedom fighters. Internationals must support us in any way that is necessary. I think that we need more than emotion, we need your actions on the ground. Come here to learn and then go back to struggle to build an international movement to help us achieve peace. Do your duty. You must take responsibility for what is happening here. You can do a lot.

Bassem Tamimi is the father of Ahed Tamimi who at aged 16 slapped an Israeli soldier outside their home. Her mother, Naiman, was arrested shortly after her daughter for filming the incident. Both were imprisoned for eight months. The family’s home received a demolition order in 2010. Bassem is part of the One Democratic State Campaign.