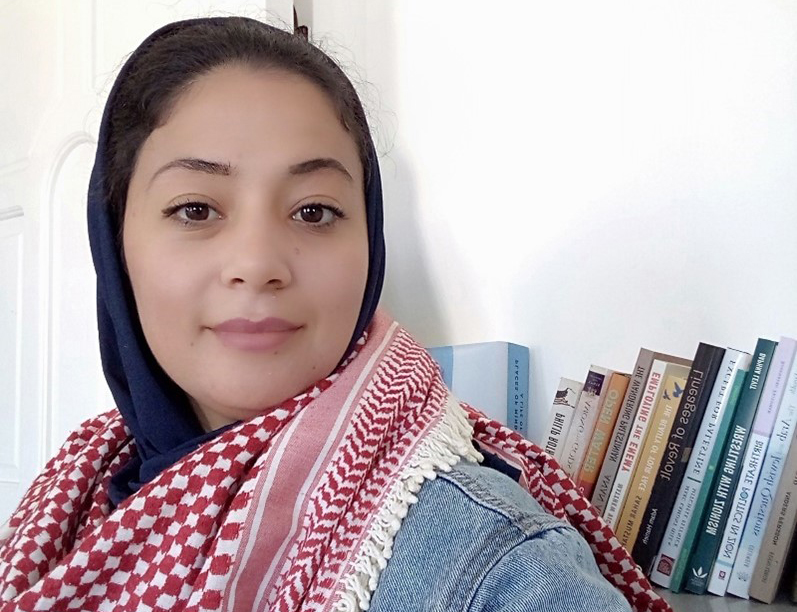 1. Rifka, did you grow up in a refugee family? Tell us about your family background.

Yes, my father is from a forcibly displaced family from the village of Zarnouqa, located in the Ramleh district, and my mother is also from another forcibly displaced family from the village of Qatra, also located in the Ramleh district. Both of my parents were born refugees in the Nusairat refugee camp, in the middle of the Gaza Strip and I live now in Gaza City. I am a mother of two girls who do not know yet that we live in the largest open-air prison on earth. And I work voluntarily with The Gaza Voice team, which is a team of BDS activists who believe in boycotting apartheid Israel as a method of struggle, and most of us support the one-state solution as a final and just solution to the Palestinian cause.

2. Who were your role models while you were growing up?

Since my teenage years, I have felt that I tend to be a follower of critical thinking as opposed to the conservative and traditional way of life, which I see as negative on all levels, including the political and social.  I admired all the revolutionary personalities who fought for justice and freedom: Nelson Mandela, Che Guevara, Gamal Abdel Nasser, Hoda Shaarawy and Nawal El Saadawi—to mention but a few.

3. What happened in your life to inspire you to speak out on women’s issues? Was it through music or books or voices of other Palestinian women?

Books are what affected my awareness most and made me more open to issues of freedom and justice, not only for women, but for all subaltern groups.

I also did not feel comfortable when I saw commercial advertisements on television that confine women to specific forms of beauty, and how this affects women's vision of themselves, their choices and their destinies, such as marriage, for example.

More precisely, as a Palestinian woman and Arab woman, I felt that women’s issues, which are still pending without a radical solution, are intricately intertwined with issues of class, racism and colonialism. I still believe that dismantling these problems must be simultaneous and immediate to solve the women’s question since, as Angela Davis pits it, justice is indivisible.

So I cannot imagine that I would struggle as a Palestinian for my right to return to my ethnically cleansed village, the right of my people to self-determination, my right to freedom of movement and travel, and my right to end this unjust siege,  my right to communicate with the Palestinians anywhere on the land of historic Palestine and outside it, and my right to clean water and medicine for my children, all of this and I am still oppressed as a woman by capitalist patriarchy like all the women in the world. And if Palestine suffers from this more than other countries, it is because of the policies of colonialism and racism, which I do not separate from the analysis of the situation of women in marginalized and colonial areas.

In other words, how can I demand the liberation of women in a region where all human beings are oppressed and at the same time how can I, as a Palestinian, demand liberation from colonialism when I am still a victim of the patriarchal and capitalist system?

4. Do you connect with other feminist groups in different parts of the world so that you feel part of a world movement?

In my country, I did not want to communicate much with most of the mushrooming  Western funded feminist organizations because of their selective liberalism in raising women’s issues in Palestine, and their provision of superficial aid that could not produce a just and fundamental solution; they avoid addressing the issue of oppression practiced by the apartheid state and Israeli settler colonialism for fear of losing their funding—not to mention that they avoid other critical issues such as class and race.

In general, I do not consider myself a feminist in the strict theoretical sense of the word, but I try to be part of movements that look at justice in an intersectional manner, and this is what made me volunteer in the BDS movement, which believes in intersectional justice for all marginalized groups in the world, including women, and rejects all forms of exclusion.

As part of my work, with female activists from Gaza, we focus on influencing women and raising their awareness of the intertwined national and social situations and the importance of their role and participation. For example, we worked on drafting a manifesto for women's boycott of Israeli products and for it we communicated with other women's associations to facilitate access to women from various backgrounds. We also produced a podcast in which we hosted Palestinian women from different places in the world. For example, we hosted the academic Rabab Abdel Hadi from the University of California at Los Angeles to talk about Palestine as a feminist issue; Dr. Fayhaa Abdulhadi talked about feminist oral history, to which she contributed; gender specialist Safaa Tamish talked about the importance of gender education for children and adolescents; and the academic Amira Silmy from Bizet University talked about the Resistance Literature.

And all this is related to my belief in the issue of women's liberation, as well as the cause of the Palestinian people alike.

5. You have said that Palestinian women are most able to imagine a more just vision of your future, with a single democratic state for all its citizens in historical Palestine as its goal. Why do you feel so strongly about that?

The experience of other colonized and oppressed people shows us this. We Palestinian women have studied the lives of Black women and we’ve decided that it is now time for us to speak up and endorse intersectional feminism because this should not be left to white women to be the only voice because too often they disregard race, class and most importantly, colonialism. Intersectional feminists acknowledge that patriarchy, capitalism, racism, and colonialism are all oppressive forces that have different backgrounds but the common aim of dehumanising “the Other.” We have concluded that a clear political vision for our own Palestinian resistance is needed to reach the stage of forcing the Zionists to offer us a historic apology.

Increasingly people recognize that the Zionists have created an apartheid state which manifests itself in Jewish supremacy which functions in the same racist spirit that manifested itself in apartheid South Africa and in the American South. We are asking ourselves what is needed to liberate ourselves. We know that the Palestinians have gone through different stages in our struggle. Initially Palestinians called for full liberation of historic Palestine but then we fell into the trap of agreeing to so-called interim solutions that have led it to compromising our basic rights through the Oslo Accord, which I think was a disaster.  In this process the Palestine Authority was established as a step towards self-governing.  I believe all this was an attempt by the international community to liquidate our cause and promote the so-called “two-state solution”.

6. Can you provide more explanation on this?

In 1947 the Palestinian people rejected the partition plan which would have given Palestinians 43% of historic Palestine. According to the Oslo Accord, Palestinians would get only 22% which is even less. It does not take into account the rights of the Palestinian citizens of apartheid Israel and fails to address the suffering of millions of refugees who live in camps and in the diaspora. In other words, the two-state solution reduces the Palestinian people to only those living in the 1967 territories, i.e., the Gaza Strip and the West Bank. In addition, apartheid Israel has made the two-state solution impossible by expanding the existing illegal settlements in the West Bank, imposing a siege on the Gaza Strip, and by annexing Jerusalem and declaring it its eternal capital, all of which have created irreversible facts on the ground. Moreover, it disperses the Palestinian people and confines them into isolated cantons, each with its own concerns that do not converge with those of others. For a start, it’s our legal right to return to our initial liberation project and fight for the liberation of all of historical Palestine, from the river to the sea.

7. How can change come about especially at a time when the Palestine issue is not a major news story or of concern to governments?

Just like the apartheid regime in South Africa was dismantled and the South African people elected Nelson Mandela as their first Black president after he had been a political prisoner for 27 years, we aspire to dismantle Israeli apartheid and the abandonment of Zionist colonial privileges, and we must do this even if Palestine isn’t in the news.

I know that this scenario may seem to be utopian considering that our vision of liberation has been distorted by the exclusionary ideology of the two-state solution. However, the one democratic state solution is the only answer that can guarantee our basic human rights, including the right of return and the right of self-determination. This solution can be achieved through an alliance between Palestinians and anti-Zionist Israelis, who support the right of return and are willing to give up their privileges as the descendants of colonizers in order to share the struggle for a better future for all of us. Also, this goal can be achieved with the support of freedom-loving people of the world, international civil society and intensifying grassroots resistance, with the Palestinian-led BDS movement.

With this type of resistance, not only will we be able to liberate the Palestinian people from colonial oppression, we will also liberate our oppressors whose collective consciousness, admittedly, will not be easily penetrated as they are not going to give up their privileges as colonizers willingly. However, we can reach victory through our collective efforts and the Palestinian legacy of resistance, together with a clear-cut political vision that has wide popular support, and the lessons we have learned from other liberation movements, international law, and the world-wide Palestinian solidarity campaigns.

Rifka Al-Amya is a Gaza-based BDS activist. She has written pieces in Arabic on women's liberation, in addition to being a member of the One Democratic State Campaign in Historic Palestine (ODSC).