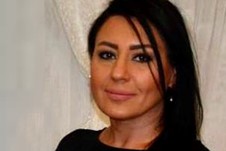 1. Going through your CV makes for impressive reading. Your many accomplishments indicate that you are strong and determined to work for a more inclusive democratic society. Tell us about your background.

I was born into a Christian family in the Galilee in the small town of Pki’in which is 30 kilometres northeast of Acre. When the state of Israel was founded, Pki’in wasn’t demolished as happened to so many Palestinian towns and villages at the time. This was because some Jewish families lived in Pki’in and because most of the population there were Druze.  Because of the Nakba which created more than 750,000 Palestinian refugees at that time, some Muslim families came to live in Pki’in so it has a history of being a mixed town. Today it has a population of around 7000 but only one Jewish family remains there. Tourists visit Pki’in to see the ancient synagogue.

2. And your family? Tell us a little more about them and your early years.

I was surrounded by our extended family. My father was a bus driver and my mother was a teacher who instilled in us a love of learning. I’m the oldest. I have three sisters and one brother, and we are all university graduates. I can say that our family wasn’t political and that I was the one who travelled the farthest to pursue my education. I broke out of the box of Israel/Palestine and became more open and accepting of others. Over the years I’ve challenged the perspectives held by my family and now they are more open-minded.

I went to the local high school where all the students were Palestinian. But then I decided to attend the Hebrew University in Jerusalem where I got a degree in social work because I wanted to understand this field and how to help people by doing community work.

4. What was going to the Hebrew University like for you? Did you experience any discrimination?

My time at the Hebrew University was good. I was there between 1992 -1995 when people were still optimistic that the Oslo Peace Process would achieve its objectives. At the time I think that at least 30% of the students were Palestinian. Although I knew that we lived under structural systems of discrimination, while at the Hebrew University I never experienced it from the administrative staff nor from my professors and I had Israeli Jewish friends. After I got my degree, I returned to the Galilee and to Haifa and took on the role of a social and community worker and had various positions over eight years. This time allowed me to expand my experiences which also included working on behalf of abused women and becoming involved in the feminist movement. Then I decided to pursue my master’s which I did at Haifa University where I gained a degree in Social Planning & Management of non-Profit Organizations.

5. I know that you didn’t stop there; you went on to gain your PhD. Tell us about that experience.

I had a growing desire to experience another culture – European and not American. I was lucky to be offered a scholarship from a German foundation (KAAD) to do my doctoral studies at the political science department at Leibniz University of Hannover, Hannover, Germany. The title of my dissertation was Women’s Activism between Nationalism, Feminism and The State: The Case of Palestinian Women Citizens of Israel. I remained in Germany for ten years, became a university lecturer and gained German citizenship. Then I returned home but not to the Galilee.

6. So where do you live and what have you been doing since you returned.

I moved back six years ago and decided to live in Ramallah because I wanted to live in a Palestinian context, get involved in a Palestinian university and teach students in Arabic. I accepted a job at Al Quds University with my most recent position as Assistant Professor of Political Science and the Head of the Department of Social Work. Of course, this means that I experience going through checkpoints when daily I see Israel’s oppression. However, I remain in a privileged position with freedom of movement because I’m an Israeli citizen and have an Israeli number plate on my car.

I’ve taught a range of graduate courses such as the Israeli political and economic system, Zionism and demography, Arab contemporary political systems, women’s movements in global perspective, research methods in social sciences and more. I’ve become involved in several organisations such as I’m on the Adalah Board of Directors, am head of the specialists’ group on women and gender issues for the Palestinian National Authority and I’m part of the Strategic Peacebuilding Programme for the Oxford Research Group.

I’m also a research fellow and member of the research group ‘Shared Palestinian and Israeli Citizenship in the State of Israel’ at the Van Leer Institute, Jerusalem. I’m interested in the history of Zionism and how/if Israeli Zionists can move beyond its position of control to sharing the land and with positive power-sharing. And more generally, about the conditions and opportunities, as well as the obstacles of having a new political reality where Arab-Palestinians and Israeli Jews can share, and I mean equally share life on this land.

7. As you long to live in a democratic country, what additional steps are you taking to help bring that about and what is your vision for the future?

I’m part of the One Democratic State Campaign (ODSC) because I believe that this is the way ahead. Our lives – Jews and Palestinians - are so intertwined, and I don’t see how there can be complete separation between the two people groups. However, I think that we have a long way to go. There are many different opinions expressed within the ODSC group. Maybe there are other steps that need to be taken along the way especially because people are so divided, look at what happened in May. Israeli society has been moving more and more to the right and they do not recognize the entitlement of Palestinians to live on the land. We still talk about having a bi-/multi- national state. Without doubt we must have representation of all people groups in the future. We must start bridging the gap between us so that is why I do my research work and it’s why I work with Israeli Jews who believe in similar values.

8. How do you feel about the need for international civil society to be involved in campaigning for justice for the Palestinians? Palestinians are so fragmented, it’s hard for them to meet together, to coordinate and plan for the future.

I appreciate internationals who stand in solidarity with Palestinians, who reject Israel’s oppression, especially as they also have their own problems within their respective countries. You mentioned justice. I don’t believe that we’ll ever have justice. Look at history, has total justice ever been achieved anywhere? Justice is only one aspect. I think that people need to really look at the reality. How do we get Israelis to look at themselves? How do we get them to open-up and recognize the other? How do we get them to want to live in peace?

I also think that Palestinians need to be taking more responsibility for themselves. They must understand the game of power and the language of power, politics, interests and not only historic justice. Then they must decide what they want from the international community. In other words, we need also to identify a national strategy including the ways and tools for achieving it. Then we need to be serious about the help that is offered to us. Right now, I’m very pessimistic about where Palestinians are in this.

9. What does justice for Palestinians look like for you?

First, Israelis must recognize the Nakba. Secondly, refugees must be acknowledged and allowed to come home and for those who chose not to, they must be compensated for losing their home because their suffering has been immense. For me the big issue is reconciliation – learning to build our future together. Working towards that aspect is my passion and this means that we have to find ways to start coming together now. That is why I work with Israelis. I learn about them, their history, their society. I want them to also learn about me and my history. I focus on what is happening internally. What makes me most optimistic is what is happening amongst scholars and some activists.