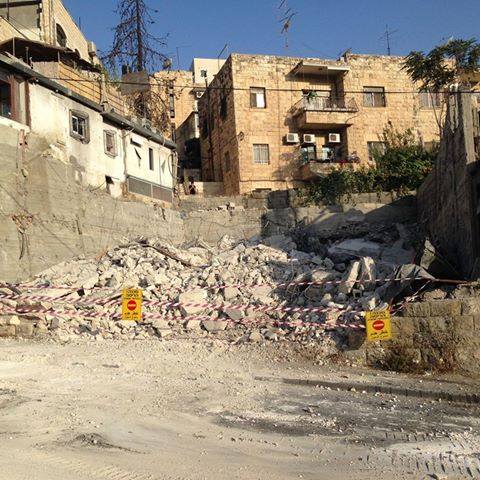 The Israeli Committee Against House Demolitions (ICAHD) deplores the continued demolitions and displacements occurring in East Jerusalem, the E1 area near Maale Adumim and in the Jordan Valley. At 3:30am this morning the Israeli army, police and border police together with officials from the Jerusalem Municipality arrived in Wadi al-Joz to carry out a demolition on a three story home. The home belongs to a family of 14 who are now confined to living in the small two bedroom home they had been living in while their new home was completed. The two bedroom house they currently call home has a demolition order on it to be carried out within the month which will leave the family entirely without somewhere to live.

The Jerusalem municipality rarely issues building permits to Palestinians leaving them to build without permits and continually face the threat of displacement. This tactic utilises the bureaucratic system to systematically reduce the number of non-Jews living in the city while simultaneously encouraging the development of illegal settlements both within the city and its outskirts.

On the 17 Aug. in the area of the planned E1 settlement a total of 22 structures were demolished in four communities (Khan al Ahmar, Abu Falah, Wadi Sneysel, Bir Miskoob and Az Zayyem Bedouin), displacing 78 Palestinians, including 49 children, the vast majority of whom are Palestine refugees. According to UN records, this is the largest number of Palestinians displaced in the West Bank in one day in nearly three years.

On the 18 Aug. the Civil Administration and military representatives came to the village of Fasayil in the northern Jordan Valley, which has about 1,500 residents. The forces demolished 17 structures which has left 48 people homeless, including 31 minors. Temperatures of up to 41 degrees Celsius were recorded in the Jordan Valley. In most of the communities in the area, as in other parts of the West Bank, Israel prevents Palestinians from establishing permanent homes and connecting them to water and electricity infrastructures, thereby leaving them exposed to harsh weather conditions throughout the year.

ICAHD welcomes UN officials’ recent statement on home demolitions in the West Bank stating that “[T]hese demolitions are occurring in parallel with settlement expansion. The relocation plan for these communities would effectively remove Palestinian presence in and around the planned E1 settlement project. This settlement project anticipates the construction of thousands of new Israeli housing units in the West Bank on the outskirts of Jerusalem. E-1 has long been opposed by the international community as an obstacle to the realization of the two- state solution and a violation of international law.”