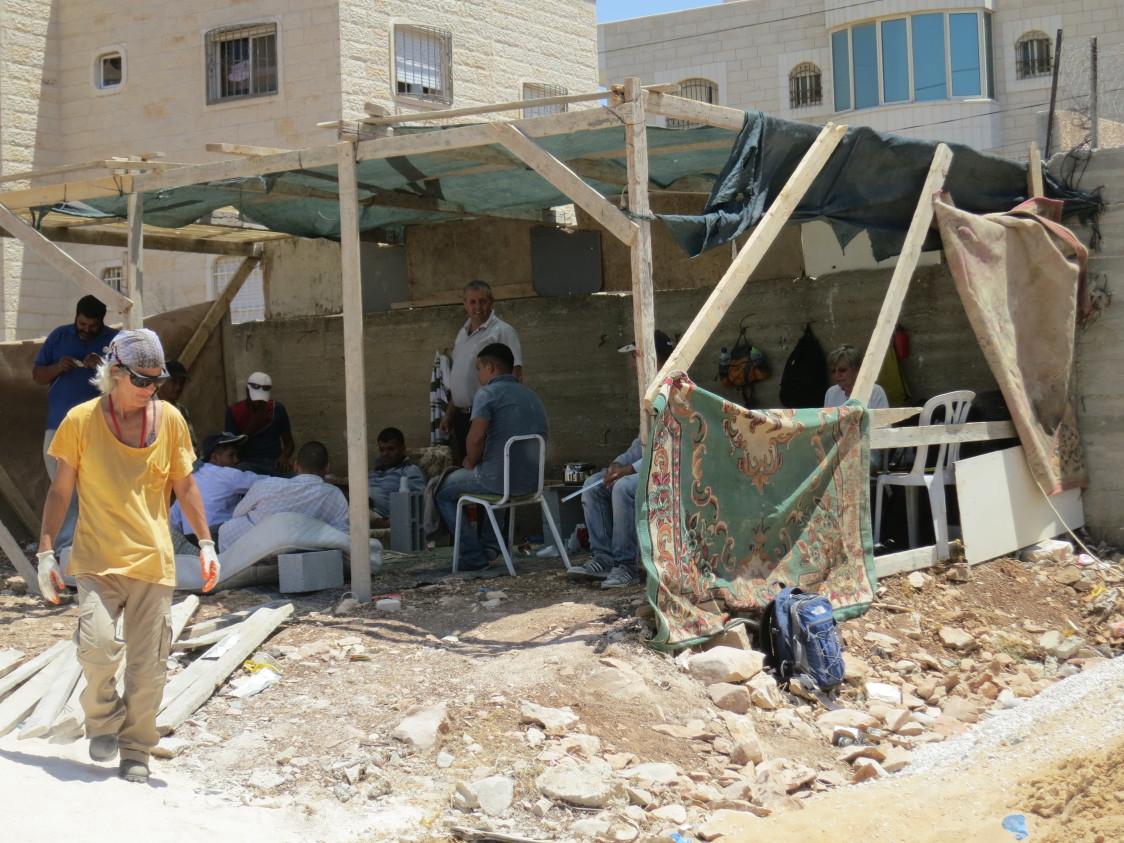 Jean Reisman, an American who participated in ICAHD’s recent rebuilding camp, responds to the news that a ‘Tel Aviv Day’ will be featured along the banks of the Seine in Paris. Jean draws upon what she learned during the field trips that were provided for the internationals at the camp:

Tomorrow, the Paris city government is planning to bring the beaches of Tel Aviv to the banks of the Seine, in one of those acts of urban experientialism meant to attract a summer crowd with a combination of gratuitous amusement and guaranteed safety, as well as a taste of the exotic and a slug of advertising from the sponsors. It’s an annual confection, a simulated seashore, this year with a different country featured every day for a month. Activists inside and outside France have objected to the prospect of, as one local politician noted, “a nice bit of PR that Paris is serving up on a plate” for the Israeli government, a side dish in the hasbara campaign to rehabilitate Israel’s damaged global image. The festive exercise is particularly glaring on the one-year anniversary of the Gaza invasion, summoning up the indelible image of four Palestinian boys killed on the beach there as purported terrorists. According to the event’s producer, its ambition is “to give Parisians and tourists the Tel Aviv experience without having to go anywhere” – and indeed it will. The French divertissement is in some respects a perfect mimicry: an artificial environment promising both diversion and security, the reminders of any underlying social injustice or political conflict to be concealed off-stage, suspended outside the audience’s peripheral vision.

I was at the beach in Tel Aviv at the end of July, on a stretch of shoreline covered with orange umbrellas like a forest of mock-Polynesian drinks at an American tiki bar. The sea was warm and soft, and I was so buoyant that to float was effortless – as effortless as a day at the beach seemed to be for the other tourists and locals. The salt content at the eastern end of the Mediterranean must be high; I could taste it on my lips, a sharp mineral bite that reminded me of Passover, dipping the green vegetable, the karpas, into a prepared bowl of salted water, representing the tears of the Hebrew slaves in Egypt. Although that bowl also could hold the contents of a Palestinian well which – because of Israel’s invasive drilling in the West Bank – has become so saline that it is unfit for domestic consumption, while the sweet water underneath flows to the illegal Israeli settlements and beyond.

On my third trip to work with the Israeli Committee Against House Demolitions (ICAHD) rebuilding Palestinian homes demolished by the Israeli military and civil authorities, this expedition was my first full encounter with the enormous psychic gap between Tel Aviv’s scorching seaside sand and the dust and rubble of the West Bank – between the occupation and the manufactured normality of a day at the beach. I stepped off the promenade into the dissonance, molted into my swimsuit in the public dressing room, then found a place to sit on my towel in the dappled light of a palm grove, quiet until an adjacent couple started bickering in a rancorous mix of Hebrew and English. I turned away, shifting my line of sight to a set of the pull-chain showers that sprout frequently along the eight-mile strand. The four showerheads were deployed constantly. A pair of pubescent girls in matching blue two-piece suits pulled opposite chains and washed the salt and sand out of their hair, flinging their wet manes self-consciously. A French-speaking father playfully rinsed the squealing toddler in his arms, the boy shocked and delighted by the pulses of sparkling spray, grabbing again and again at the chain that controlled the gushing stream, itself so strong he had to close his eyes and reach blindly for the swinging handle while he laughed.

In that gesture of play and plenty is inscribed the byplay of the occupation and the Israeli mundane. Much of Jewish Israel reaches blindly for water, as if most of what spouts every day from its faucets comes spontaneously from somewhere other than the West Bank, whose aquifers are diverted to the settlements and piped across the eastern flank of the country. Eighty-five percent of the water extracted from those aquifers go to Israelis and settlers, in defiance of international law. Twenty-five percent of the Israeli water supply comes from the Jordan River, to which the Israelis have no legal access. Simple fact: the occupation of the West Bank (including the Jordan Valley) delivers stolen water to Jewish Israelis all day, every day, at a subsidized price, while withholding water from the Palestinians whose rights to the land and its substance have been abrogated. The evidence is plastered across the skyline: Palestinian rooftops on both sides of the Green Line have black water tanks, and Jewish Israeli buildings have white ones.

The black ones are not a quaint fixture of vernacular architecture; they provide storage for water that only flows two days a week – unless there are longer arbitrary interruptions – and at a higher cost per liter. And the white ones are not an alternate color choice of container, but a device for a continuous supply of hot water, thanks to the tidy solar panels now required by a building code that green-washes the fundamental inequity of distribution. It is official state policy that taps never run dry in Jewish neighborhoods and facilities, while urban Palestinians’ water supplies are rationed. Rural Palestinian communities (including the beleaguered Bedouins) are denied access even to rainwater as well as the groundwater below: their wells drained and sometimes deliberately contaminated, their cisterns smashed or spoiled, their villages forced to rely on an extortionate system of water delivery via tankers that must be filled offsite – often by settlers who pay little or nothing for their water – and dragged by truck or tractor back to their precarious dwellings, leaving families in chronic debt. Meanwhile, the showers at the beach in Tel Aviv shine as the spray pours out, a fine mist rising and evaporating from each station, like the rationalizations that conduct the water from its source.

Tel-Aviv-on-the-Seine will reproduce far more of Israel’s atmosphere than it surely intended. The sand carted in to the river’s edge does not so much resemble a beach as it does the rubble of a nearby Jaffa neighborhood pummeled by Israeli paramilitary artillery in 1948, its fragments later buried along the Tel Aviv waterfront as landfill for parkland. The beach chairs stamped “Tel Aviv” for a day will face away from the entire apparatus that makes such carefree dalliance possible: the Separation (Apartheid) Wall that reaches deep into the West Bank to lasso the Israeli settlements as well as ensnaring Palestinian agricultural land; the relentless Palestinian house demolitions and displacement within Israel as well as the occupied territories, as the settlements advance; the militarized control of all Palestinian movement; the dangerous fantasy of a two-state solution well past its sell-by date that would leave the Palestinians stranded without water, without arable soil, without a sustainable economy on the small urbanized islands Israel has circumscribed for them. In Paris as in Tel Aviv, illusion is all.