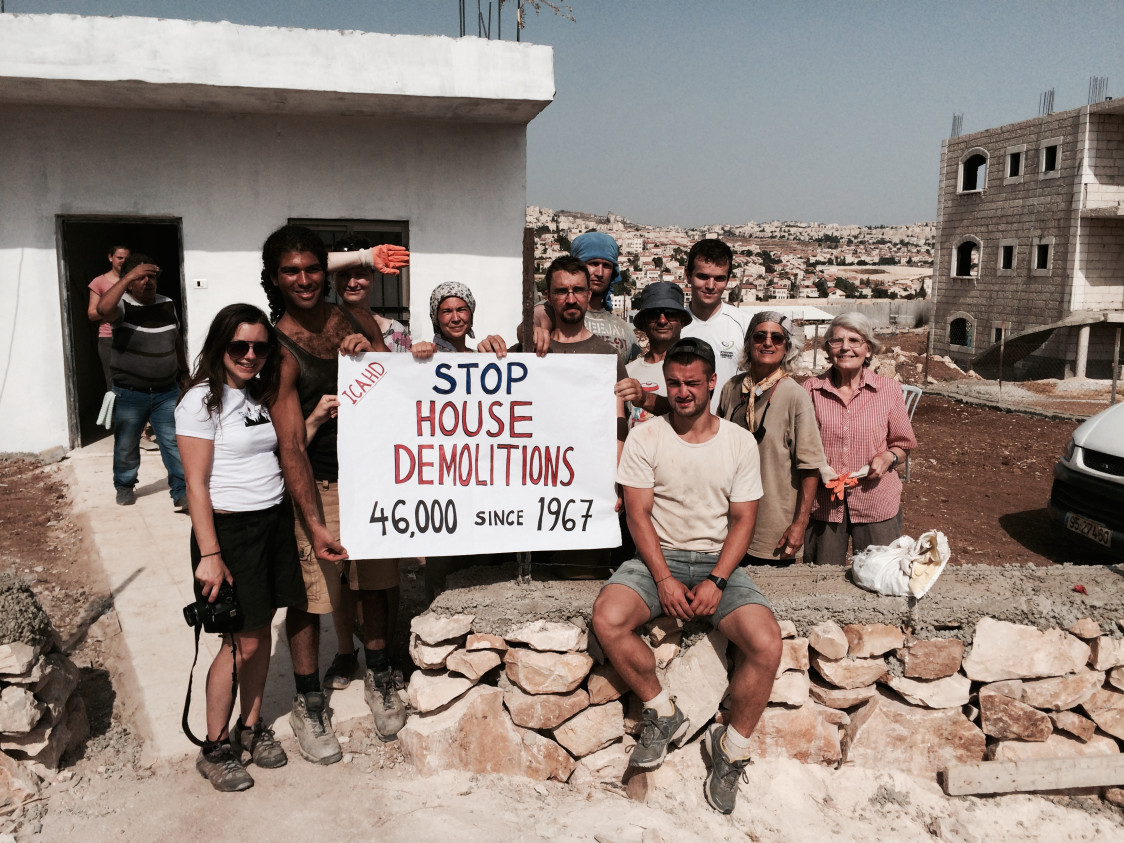 Reflections from one of the participants who joined ICAHD’s 13th annual rebuilding camp:

Despite not being completely new to travelling or experiencing different cultures, the two weeks I spent at ICAHD’s summer rebuilding camp offered encounters I couldn’t have imagined and that would never have happened had I been travelling to that area on my own – even over several visits!
With Israel/Palestine being such a contentious issue and with a violent history, what we learned about was not always easy to process and could be quite draining emotionally. Seeing the stark differences between the Israeli and Palestinian areas as we travelled by minibus through the renowned checkpoints really highlighted what I had read about before coming. Such first-hand experiences including all the families we met and organizations we visited gave an incredible insight I couldn’t have grasped simply from reading books.
On top of this we had the privilege of spending so much time in the company of Jeff Halper, ICAHD’s co-founder, undoubtedly one of the great thinkers on the issue. Jeff led some of our tours, provided informal lectures and spent a few nights at the campsite which allowed us to chat informally. With his analysis and the chance to ask any questions (no matter how basic) and the briefings we received from NGOs, as well as accounts from locals (both Israeli and Palestinian), I can’t remember a time when I learnt about a topic so intensively yet easily.
The group this year – who will of course be different every year – was very supportive and there was an understanding among us that we were all there for the same reason – to build a house and to learn as much as possible about today’s reality. So, even though I don’t think a more diverse group could have been selected, ranging in age from 19 – 72, from different backgrounds and countries, our common purpose brought us together. This greatly helped, as the living arrangements meant we were in close quarters (and with modest washing and toilet facilities) but still it was not very taxing for the two weeks of the camp and it became part of the fun experience.
The camp itself was in an interesting setting, situated at Beit Arabiya, the property of the incredibly welcoming Salim and Arabiya Shawamreh, right next to the ruins from the sixth demolition of their home and with the ominous looking Shin Bet detention centre located directly across the valley. However I had expected a much more modest situation! We were all comfortable; the men slept outside in a large tent and the women inside the small house (rebuilt in 2013 after the 6th demolition). The gender split was an aspect of the culture we had to come to terms with, as all food preparation and washing-up was done in the house where the men were not to enter.
An aspect of the camp that I liked was the split between the physical rebuilding of the house and the field trips. Some days we spent all day at the worksite and then on other days we were away visiting other parts of the Occupied Territories and Israel.
As we worked together and with expertise from some Palestinian builders we quickly saw the house take shape. It was an amazing experience and the release of physical work and brief conversations with the builders and co-campers was important for processing all the information we were taking in on other days. The satisfaction of seeing the finished house and of seeing the family move in at the end was definitely something I will never forget.
– Erik, UK