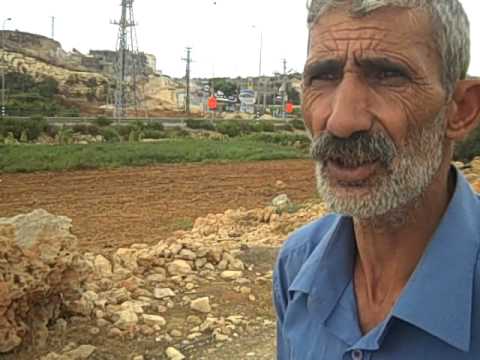 A phenomenon that is absent from much of Western Europe is a fear of bulldozers. A logical absence it would seem. Yet the story is somewhat different for Palestinians living in Israel and the West Bank. I am being driven to meet a Palestinian family, Atta Jaber and his wife and four children, whose home has been demolished by Israeli authorities on three occasions; the driver himself has also had his home demolished on six occasions.

As we approach the Jaber family’s current home planted on a steep rocky hillside, piles of rubble and twisted metal rods can be seen which, like urban gravestones, mark the sites of their previous homes.

Why were they demolished?

‘Because we didn’t have a permit to build.’

Legally, the majority of the land in Israel and many parts of the West Bank cannot be built on or developed by the non-Jewish population; a complex system of seemingly neutral ‘zoning’ laws, effectively prohibit Palestinian’s from building on their own land. Though expensive applications may be made for building permits, they are invariably refused by the administration, forcing families to build anyway in the knowledge that their home may be demolished on any given day.

The Jaber’s do not receive running water or electricity to their home as a result of their ‘illegal presence’ and so dig wells and rely on home-made generators.

‘We have been making applications to have water to the Civil Administration for 14 years! We finally received an answer 2 months ago. A refusal!’

Overlooking the Jaber’s house about 50 metres away there are a number of houses with Israeli flags on the rooftops. It is because of the actions of this community living opposite that the Jabers have received much media attention both inside Israel and abroad.

A short video captures one of the instances in which a crowd of ‘settlers’ make their way up to the Jabers’ home, with children in tow, to uproot and destroy the family’s only source of sustenance: a small garden and vegetable patch from which the family sell vegetables by the roadside.

As the Jabers record the incident using a camera given to them by a human rights organisation, two men from the party can be seen proceeding to barricade their windows, whilst their children dig up plants using the families own gardening tools.

‘It was actually the mayor of the community opposite that you see leading the group in the video.’

This is just one of many incidents that captures the steady stream of intimidation and humiliation that the Jaber family is subject to.

Two years ago, the home of Mr Jaber’s elderly father who lives at the bottom of the hill, was surrounded by tyres and set on fire by the Israeli settlers living opposite. His car was also set on fire.

‘My father had to climb onto the roof and call the fire brigade.’

Organisations like the Israel Committee Against House Demolitions have helped to rebuild the family’s home and give the grandfather a new car which they use for bringing home crops. The family still lives below the poverty line.

‘The soldiers come always here too. Just last week they interrupted my neighbour’s wedding party by arresting the groom. They said the fireworks sounded like gun shots and took him to the police station. So instead of spending the night with his wife, he spent it in a cell. They overturned everything in the house too, the kitchen, the pictures, the bedrooms.’

‘My family used to own a lot of land which they farmed but 500 acres were confiscated by the Israeli authorities. There has recently been a big piece taken to build a park on for the settler community living opposite.’

‘There are also problems because farmers need a permit from the Israelis to harvest their own land. Often they aren’t given the permit and so they can’t access the land to harvest or plough it. Or if they do, it is only for a few days or weeks, and only you and your sons can enter it. You aren’t allowed to hire any workers.  So many farmers will take their young children out of school on the days they have been given to harvest so that they can try and recover as much as possible.’

‘There is no reasoning with these people. Look at the supposed peace negotiations. During the negotiations they were bulldozing over neighbourhoods and building settlements. They even bulldozed the shelters for the cows and sheep! They were only interested in their expansions. There were gas stations built on Palestinian vineyards that were over 2000 years old.’

Mr Jaber tells me this as he continues to show me around the garden.

The family’s small income has meant that their 19 year old daughter recently had to stop college because the family can no longer afford the fees.

‘What’s happening here, it is mafia, it is not law, it’s not a government.’

‘The UN people I meet with in Geneva. Some were crying were they heard from me. I said to them: ‘they are bulldozing over the freedom of the Palestinians – give me my humanity!’

It is not difficult to imagine how this slight, weather-worn old man would cause a scene in the air conditioned offices of UN headquarters.

‘The whole world didn’t believe us but it believed them. Why?  But always I believe you need these three things: patience, freedom, and hope for the future.’

Yet the housing demolition policy appears to be fully in force; in 2014 alone, 18,000 Palestinian homes were demolished, many of which were in Gaza, where families still await building materials to repair the damage.

Under Article 53 of the 4th Geneva Convention, of which Israel is a signatory, it is illegal to destroy or confiscate a civilian’s real or personal property. Only time will tell if this, and other international law provisions, will be fully honoured by the state of Israel.